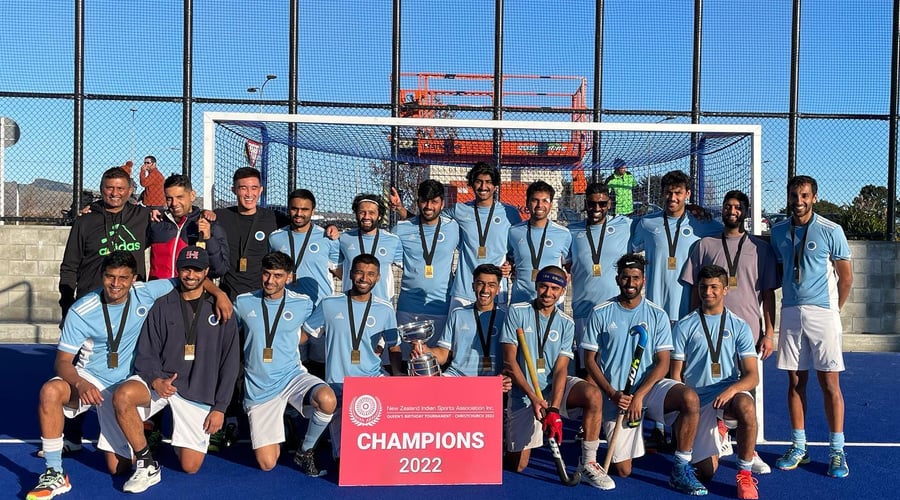 After a small absence, the Dhyan-Chand Trophy has returned to Wellington.

Our Men went unbeaten right through the Queens Birthday Tournament, with two shoot-out wins against Pukekohe and Auckland in the round-robin, and a solid win against Christchurch in regulation time.

The boys then played Pukekohe again in the final on Monday and held onto a 1-0 scoreline to claim the illustrious trophy and bring it back to the Capital.

Coach Hemant Lala was incredibly proud of his team saying, "this result didn't just come about by accident, planning for the weekend began 5 minutes after losing the shoot-out to Auckland in 2021."

Lala went on to say "It was an absolute pleasure taking the lads over the weekend, we had a number of last-minute changes and injuries during the tournament but like everything else that was thrown at us, the lads rolled with the punches and stuck to the game plan and trusted themselves"

Led by captain Shayam Bhana, our Mens A showed a superb ability to be calm under pressure and ultimatley secure four wins in a row. The competition in the Mens A section was clearly very close, as evidenced by the scores, and it shows how resolute our Mens A team were in their victory.

Not only did we bring back the trophy, but we had five of our Men in the Tournament team, Kailin Dayal, Jusdeep Singh, Vivek Lala, Sajan Patel and Hiren Mani.

With WISC also claiming the NZISA U23s trophy at the start of the year and now our Men's A team backing it up with winning the Dhyan-Chand, the WISC trophy cabinet is well on its way to being full this year. The Club are very much looking forward to turning their eyes to our Premier Men as they continue their quest in the Wellington Competition.

2023 will see WISC host QBT on our own soil, and there is no better place than home to defend your title.