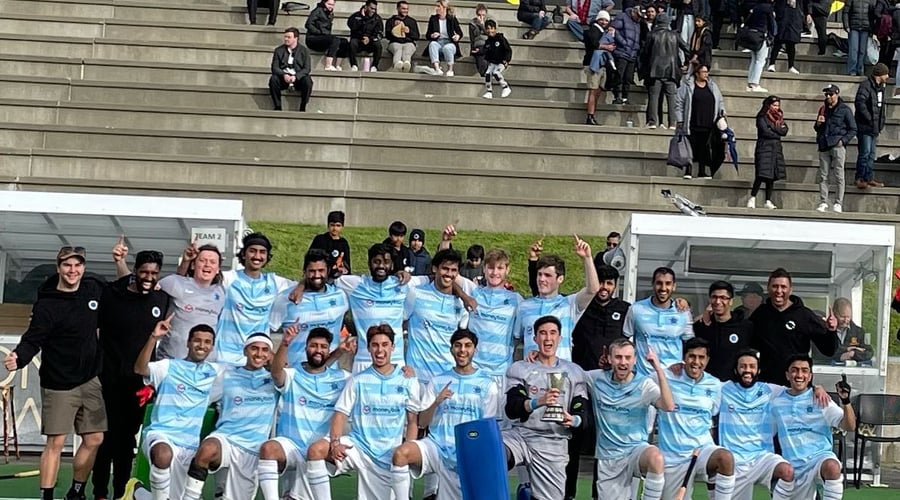 History was made last Saturday when the Wellington Indian Sports Club Premier Men secured a rare trifecta by winning the Cello Premier One Mens competition against Hutt United, 4 - 3.

WISC Men started their season strong having locked up the NZISA U23 Mens title in late January during some blistering Auckland heat. Captain of the U23 side Kailin Dayal was incredibly proud of the team dynamic saying, "the team was well balanced with youth and experience which was much needed given the short preparation time that COVID induced". He went on to say that, "the team demonstrated great resilience and composure after a comprehensive loss in the first game to bounce back win both games thereafter to secure the championship".

As the season moved along, there was a urge amongst the group to replicate the successes of Auckland in the deep south, where the Dhyan-Chand Trophy was up for the taking.

In Christchurch, the Mens A team went unbeaten throughout the Queen’s Birthday Tournament. Not only did we bring back the Dhyan-Chand, but we had five of our Men in the Tournament team, Kailin Dayal, Jusdeep Singh, Vivek Lala, Sajan Patel and Hiren Mani.

That led the Premier Men to last Saturday, an opportunity to go three from three.

Hutt United posed as a difficult challenge for our boys, but right from the first whistle, they were up for it.

Captain of the Premier Mens team Will Zhou said, "it was an absolute cracker of a final, one in which we dominated for long periods of the match, just to allow the opposition to claw their way back in the final minutes of the game."

"The difference between these past few weeks compared to earlier parts in the season however was our determination, our grit, our trust for one another to get the job done no matter what. That was something I was truly proud of."

Looking forward, Zhou said he was "incredibly humbled and honoured to have had the opportunity to lead this group" and is "really excited for what the future holds for this group and club".

Coach Hemant Lala put the Premier Men's win down to their trust in themselves, their teammates and the team's vision, saying, "we ran with a theme for the last part of the season ‘You only have to beat them once’ and that’s exactly what we did. We had a solid game plan; we were physically fit (especially quick) and our skills were of a level to play the game at a speed that others couldn’t cope with."

Both Zhou and Lala said that the crowd played a massive part in the game and thanked the Club and its Members for showing them such a high level of support across their finals campaign and throughout the season.

To have the grandstand filled with our members on finals day, WISC banners up on the fences, and three trophies locked away with the rest of the Open Grade finals to go, the Club is undoubtedly moving in a direction we can all be proud of.